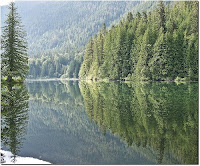 To listen to the audio version while following along with the text go to: http://hopecwc.blogspot.com

Jan and I had the opportunity to have lunch with Savannah Kennedy and several other ladies this past Sunday afternoon. It’s always a great pleasure to enjoy some time with the children of our church members because I don’t want them to think of me as just “the Pastor,” some far off person that has no value or place in their lives. So as we are eating and talking exclaims to me, “Pastor, pastor – look! You have a duplicate!” Sure enough, as everyone dining with us turns our gaze toward the order line there stood a man with his back to us and in a crowning moment of clarity, I realized what she meant. He had a shiny bald spot too! I about fell out of my chair laughing so hard; it was a good thing I swallowed before I looked.

But her comment got me thinking in light of our two missionary meetings this past week. How do people see us and hear what we talk about and do they really understand. It’s one for a 5 year old to spout off a $10 word in the correct context; it is quite another to have it make sense.

Think about how you read Ezekiel or the Revelation. At first glance it may appear to be daunting because they contain a lot of prophetic elements that have strange pictures. For example, if you asked someone living in the year 1750 to describe a jumbo 747 airplane, they’d probably say it’s “a big bird with silver wings and fire coming out of its mouth that swoops low, eats people, and takes them to who knows where.” You and I would define an airplane in modern terms but someone living in 1750 would use weird pictorial definitions.

As Ezekiel unfolds, you may think, “this guy Ezekiel is strange!” but remember this: Ezekiel lived years ago and he is trying to describe God and end times events the same way as someone in 1750 would describe a 747 airplane.

Let’s make sense of this passage together:

The face of the man is that temporal person, with frailties, susceptible to pain, that has an eternal soul but is going to suffer. It describes Christ, the Messiah, the presence of God.

Then the face of a lion—you’ve heard the term the Lion of Judah— that’s describing Christ. He will be a man who will suffer but He will also be King.

A bull in those days would be a burden bearer. He will bear our burdens, our load, and our hurts.

The eagle would be seen as a savior, someone who would hover and have strength to rise up above. The eagle actually soars up above all the thermals and then comes in as a Savior who redeems, like the Holy Spirit.

Those are all pictures of Christ.

In verse 13 we see more imagery:

In the midst of the living beings there was something that looked like burning coals of fire, like torches darting back and forth among the living beings. The fire was bright, and lightning was flashing from the fire. (Ezek. 1:13)

Let’s break this down. Does “in the midst of the living beings” imply that God is plural? No, but it does speak about the plurality of God or the faces of God. That’s the only way they could say that He’s in many places at the same time. We know that it’s not talking about many Gods because we don’t pull out one scripture and isolate it. In Deuteronomy 6, the main cornerstone verse to the Israelites, it states, “Hear O Israel, the Lord your God is one God … ”

We read that in the midst of these living beings there was something “that looked like burning coals of fire, like torches darting back and forth among the living beings. The fire was bright and the lightening was flashing from fire. The being was going to and fro like bolts of lightening.” This translates into God leading the people of by His presence which is manifested by the cloud by day and fire by night.

We see different aspects of the Glory of God described in ways that are a little unusual, but Ezekiel gives us a pictorial description of what he has seen. With his limited understanding he is describing the many aspects of God our Savior in the person of Christ.

My take-away from lunch Sunday was very sobering. ’s words will be with me forever because she saw something rather strange, made comparisons and then vocalized it in her own words. My hope is that when she accepts Jesus she’ll come back to me and say, “Pastor, pastor – look! I’m a duplicate!”

Father, Give me the heart of child. Amen.

Some things to be mindful of this week:

Ladies (and little ladies) don’t forget the Tea and Cookies Easter Bonnet making event Saturday March 27th 10am in the Education Wing. I’m sure you will want to show off your creations come Easter Sunday! See Christine ViPond for more details.

Holy Week starts this coming Sunday with a message looking at the Four Women at the Foot of the Cross.

Thursday April 1st at 7 pm we will start our 24-hours of prayer together with a Maundy Thursday service then conclude the period of prayer with the viewing of “St. John in Exile” on Friday April 2nd at 7 pm. The sign-up sheet is in the entryway.