The following is the transcript from the November 22, 2015 service
at Little Brown Church, Nashua, Iowa.

Listen to the sermon by clicking here 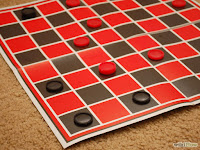 What is this game? That’s right, it’s a checkers game.  How many of you have ever played checkers? You know, I did not realize it until I began my research for this morning’s sermon, but checkers is one of the oldest games known to man. Archaeologists think the earliest form of the game was unearthed in an archaeological dig in the ancient city of Ur in southern Mesopotamia, which is now modern day Iraq around the year 3000 B.C.  Egypt had their own form of the game (called Alquerque) around 1400 B.C. (about the time Moses led the people of Israel out of their slavery and to the Promised Land).

Now neither of those games looked quite like the form of checkers that we play now. That happened around 1100 A.D. when an innovative Frenchmen made the game board bigger with more spaces.
In 1847 the first championship award was given and to this day checker championships are held around the world. The US Tourney (for example) was held this last year in Louisville, KY.
There are Women’s championships. Men’s championships. AND there are WORLD championships.

Checkers? Are you sure? Is there another game that can be played on this kind of board? That’s right… you can play chess on this board.
But in the process you lose most of your pieces as well.
They've treated you unfairly. They've done you dirty.
They've robbed you, cheated you, or said nasty things about you. In short… there’s usually a really good reason why you shouldn't like them.
Am I gonna pray for them? (maybe)
Am I going to say nice things about them in mixed company? (eh, not if I can help it)

Am I going to plow out their drive so they can get out of their garage on a wintry day? (Not likely).
Notice the first letter in each of those words. What’s it spell? (MAD)
That’s right. I’m MAD, and I’m going to make that person pay!!!


So, Jesus starts out this part of His teaching by addressing that mindset:
"You have heard that it was said, ‘Love your neighbor and hate your enemy.’”
But then Jesus tells us that is NOT how we ought to be playing.

Pray for them? (pause) Why on earth would I want to do that?
(Wait For Responses)


Jesus said: “Love your enemies and pray for those who persecute you, that you may be sons of your Father in heaven.” “… because of his great love for us, God, who is rich in mercy, made us alive with Christ even when we were dead in transgressions— it is by grace you have been saved.” Ephesians 2:4-5

If God was playing checkers we wouldn't stand a chance. Not only would we have lost all our pieces on the board… there wouldn't be a board. We’d not only lose, but we’d end up in hell.
If He’s our Father… you and I need to grow up to be like Him!


Now, when I play checkers I don’t give much thought to the game. I jump the other guy's pieces and try to get as many of mine to be kinged. But when you get to the championships, these folks take the game very seriously and they have strategies and gambits that I have never thought of. There’s the “Double Corner Master Opening”, the “Fife” Opening, the “Spider Web” and the “Zorro Trap”.

In fact, these folks have the game down so well, that in championship tournaments there are 3 specific plays that are illegal because those moves would give the player an unfair advantage from the very beginning.
Now, just so we’re clear… what kind of game is played on this board?
These two games – checkers and chess – represented to me two different ways of dealing with conflict. Checkers, for example, is the “Mutually Assured Destruction” approach.

In checkers, in order to win you the game, you literally have decimate your opponent. You need to take away almost every one of his pieces.
By contrast, Chess is an entirely different kind of game. I’m told that it is literally possible win a game of chess without losing a single chess piece. And it is also possible to win such a game without your opponent losing a piece.
When it comes to dealing with conflict in our lives, the world generally likes to play checkers, but God prefers that we play chess.

Jesus said: "You have heard that it was said, ‘Love your neighbor and hate your enemy.’” (Matthew 5:43)

That’s the opening statement by Jesus in this teaching. He’s going to follow that up by telling us how WE should look at our enemies, but He’s started out by telling us how most people think about their enemies (HATE).
Now, why would you regard someone as an enemy?
Well, they've hurt you.
Have you ever encountered someone like that in your life? Of course you have... and so have I.

Now, if a person has treated me like that… how am I likely to treat them?
In fact, if someone is my “enemy” I’m not likely to be doing any nice things for them. Instead - I’m more likely to be looking for an excuse to execute “justice” with them. If I've been hurt, they should hurt. If I've lost… they should lose; an eye for an eye, and a tooth for a tooth. It’s only fair that they should suffer as they've made me to suffer.

And that’s where checkers comes in.
It’s only just, only fair, only right, that we get some satisfaction from the pain of their enemies, even if we don’t cause it to them. They've taken pieces off my board; I should be able to take some of their pieces off their board too. And the more pieces I can take away from them (or watch being taken from them by someone else) the more satisfaction I’ll feel.

I read a story about a man the state of Washington. His wife had filed for divorce and he was furious. So he went down to the courthouse and paid $11.50 for a permit; a demolition permit. Then he went home where he had a bulldozer waiting… and he bulldozed their 3-bedroom, $385,000 home.
He figured: If she was going to divorce him – she wasn't going to have the house. Of course… neither would he. But that didn't matter.

He was satisfied because he had denied her something of value.
That’s the game of Checkers. Checkers is a game of Mutually Assured Destruction. I’m going to HURT you because YOU hurt me. And I don’t care how much it costs me… because I’m going to WIN. Winning is the object of the game, and the more I can hurt you in the process, the better I’m going to feel.
Like I said – Checkers is a game of Mutually Assured Destruction
In essence He’s saying… that’s how the WORLD plays this game.

Love my enemies?
ANSWER: So I can be like my Father.
Ok, but why would God want us to do that? Why does it matter that we become like Him? Well, He wants us to stand out in the crowd.
He is kind to those who are His enemies, and so He wants us to be known as those who don’t hurt those who hurt us.

Did you ever think about how hard it must be for God to have loved us?

Colossians says: “Once you were alienated from God and WERE ENEMIES in your minds because of your evil behavior.” Colossians 1:21

Ephesians tells us: “… at one time, (we were) gratifying the cravings of our sinful nature and following its desires and thoughts. Like the rest, we were BY NATURE OBJECTS OF WRATH.” Ephesians 2:3

And Titus declares: “At one time we too were foolish, disobedient, deceived and enslaved by all kinds of passions and pleasures. We lived in malice and envy, being hated and hating one another.” Titus 3:3

We weren't very nice to be around (you and I), but God loved us anyway.
But God loved us so much “that He gave His only begotten Son that whosoever should believe in Him should not perish but have everlasting life.”
Despite what the world may think, God doesn't want to destroy anyone. He doesn't really want to decimate our game board. God’s desire is always to save… not to destroy.

Peter writes: “The Lord is not slow in keeping his promise, as some understand slowness. He is patient with you, not wanting anyone to perish, but everyone to come to repentance.” 2 Peter 3:9

You see – that’s God’s game plan. He intended to win His game with us without us losing anymore pieces than necessary. And Jesus tells us: that’s how God wants you and I to treat others. God wants us to be like Him!
And there’s another reason for God to ask this of us. A lot of Christians believe they were saved to come and sit in a pew and listen to the preacher. I’m glad you folks do that (that way I at least have someone to talk to on a Sunday morning), but that is NOT why you were saved. You and I have been saved by God to be His missionaries.

When people see us they should be looking at the image of our Father. And the only way they’re going to see our Father in us is if we love our enemies. Loving our enemies… the way God loved us when we were His enemies.
Now what exactly does that mean? It means that when you’re in a conflict or a confrontation your goal should always be to avoid making the other guy pay. Your goal should always be to find a way to forgive the other person.
Garrison Keillor put it this way:“Do unto others who don’t like you as you would have them do unto you, but you know they won’t…. Shame them with goodness. Kill them with kindness. Cut their throats with courtesy.”

The 11th chapter of Romans puts it this way: "If your enemy is hungry, feed him; if he is thirsty, give him something to drink. In doing this, you will heap burning coals on his head." Romans 12:20

You see, by forgiving your enemy, you've actually gotten justice. They thought they could hurt you and destroy you but if you forgave them, they couldn't. And it confuses them. And it throws them off – that’s not how they would have dealt with the conflict. And it makes them step back and rethink the difference God has made in your life.

Now, here’s the deal. You and I live in a real world. We’re going to get hurt now and again… and once in awhile it’s going to REALLY hurt. We’re going to be tempted to fight… to strike out… to hurt the other person. And when that happens we have a choice to make.

How are we going to respond to that pain and that injustice? We can respond like many in the world do by getting personal satisfaction from hurting the one who hurt us. OR we can ask ourselves what God would have done in that situation and choose to do that.

That is what we are called to do. To remember that God forgave us and that He paid a terrible price to purchase us for Himself. When we remember that and we try to respond to the hatred of this world with the love Jesus gave to us… then we have truly honored God.
Email ThisBlogThis!Share to TwitterShare to FacebookShare to Pinterest
Newer Post Older Post Home